History of Water Management in Nebraska

Over the years, Nebraska has developed a variety of administrative structures and processes to manage water uses and supplies.

During its first century, in the era of independent management of groundwater and surface water, Nebraska relied on a largely centralized approach to surface water management, and a separate locally based approach for groundwater management. In the 1970s, after a decade of attempting to develop a "blueprint for total development of the state’s water that would serve for generations,” Nebraska’s water managers realized that “published plans frequently become outdated rapidly, and some serve only to collect dust after a short time.” Rather, they envisioned water planning as a “continuous process that would provide flexible guides for future decisions” and suggested elimination of “a State Water Plan and [to instead] concentrate on the Process.” What followed was a series of policy and water right studies that evaluated numerous water issues including surface water rights, groundwater management, water use efficiency, instream flows, and the integrated management of surface water and groundwater. Subsequently, many of the recommendations from these studies were implemented. 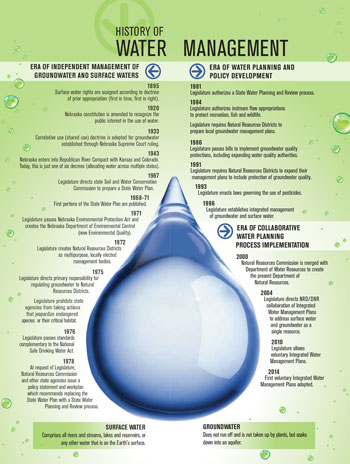